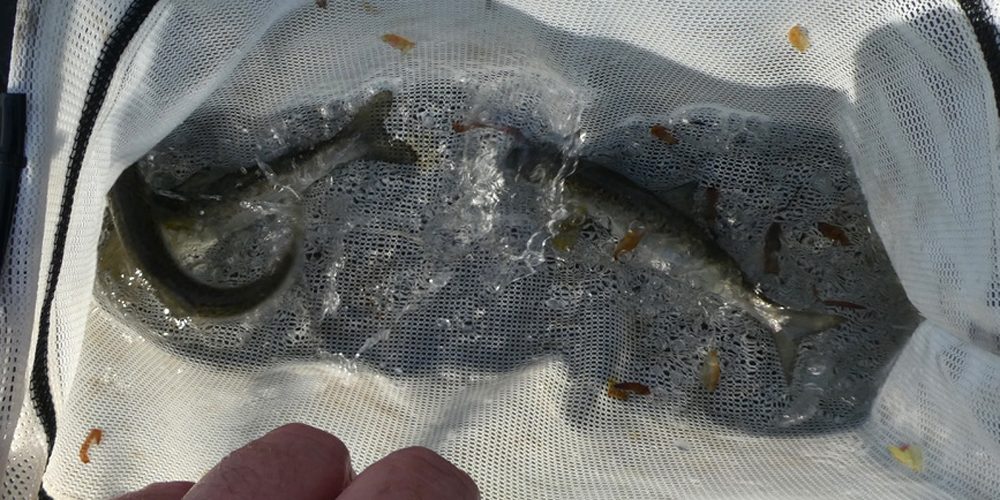 On the Ayr at Catrine where there has been severe problems for smolts migrating to sea over the last 3 years, we are again seeing smolts within the lade between penstock and screens and an occasion fish trapped in the voes. Hopefully the problem areas where smolts accessed the voes through the screens have been resolved by a temporary repair using polythene and plywood. The problems appear most severe when little rain falls and flows decline to very low levels. This makes it difficult for smolts within the lade to either find or use the by-wash as an escape route. Of course this artificial drain may just be unappealing and unattractive to them. 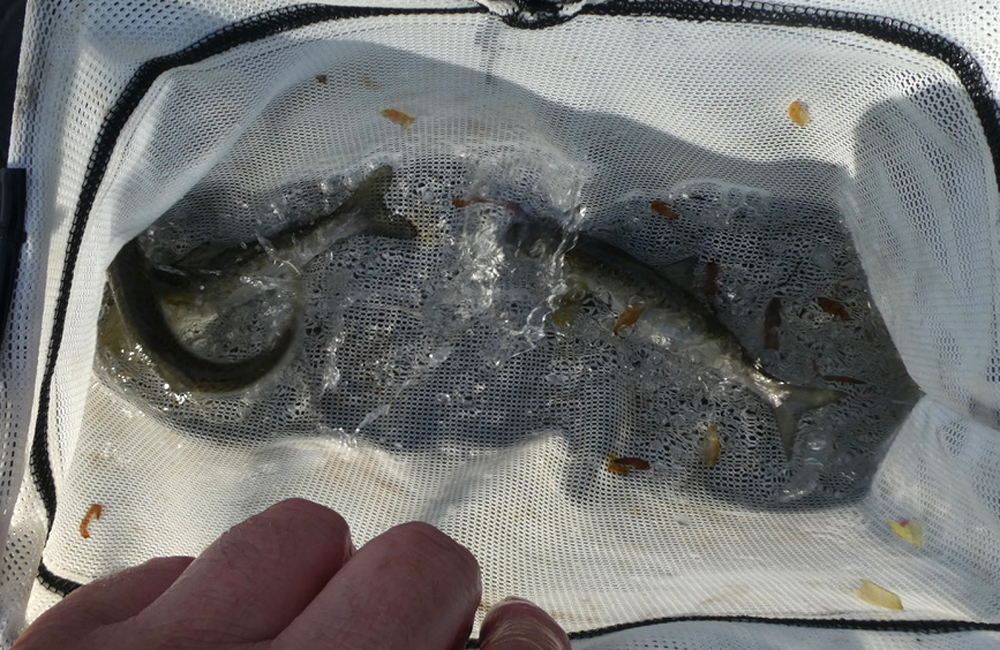 We trapped the by-wash over the last two nights and only captured twenty salmon and two trout in total. Seven salmon smolts and one trout on Thursday morning followed by thirteen salmon and one trout this morning. Twenty salmon smolts in two days doesn’t fill us with confidence that the system is adequate or fit for purpose when you consider the number of smolts that are rising in the lade and obviously delayed and the numbers we expect have still to arrive.

A moribund smolt in the trap box that is likely to die before reaching the sea. This fish was swimming lethargically on the surface. Its gill function is severely impaired

One salmon was beak marked and will probably not survive. One trout and 3 salmon carried fungal infections. With warmer weather forecast to arrive in the next few days, we are concerned that once again we may see a repeat of the fungal outbreak that occurred last year as water temperatures rose. The bacteria are present already as seen on 4 fish already and once water temperatures rise, another fungal outbreak may be inevitable. 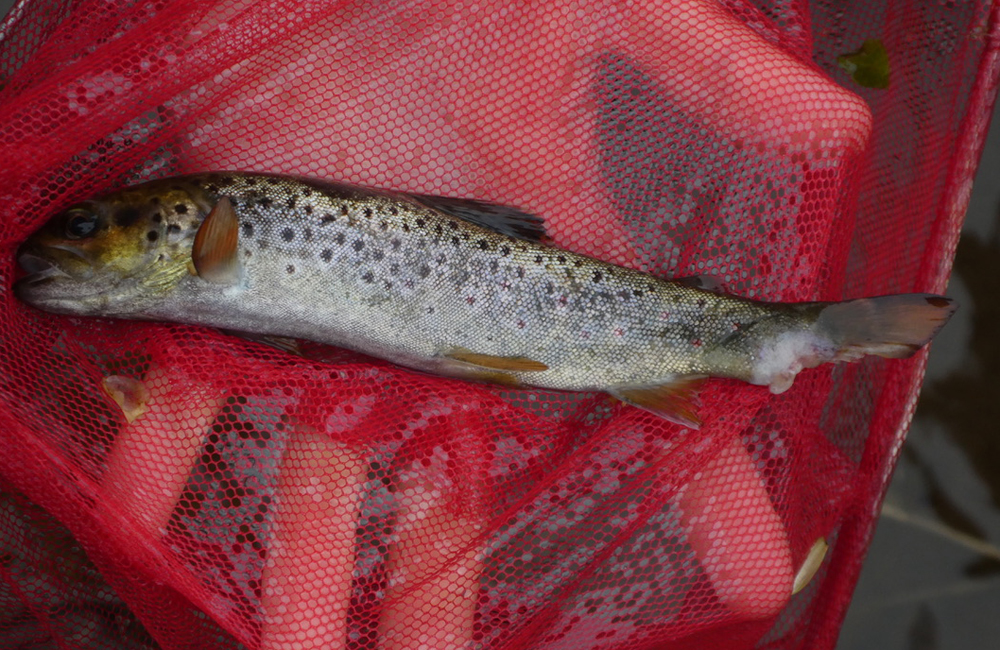 Another fish affected by fungus that appeared in the trap. This time it was a trout

While at the dam on Thursday evening, there were a few grammons hatching and the smolts were rising to them. It is only when they are active like this that you really get a sense of the number of fish between the screens and penstock. As I watched, I saw a crow fly into the lade and it swiftly took off with a smolt in its beak. Every type of predator homes in when these fish are delayed and vulnerable. So far this year we’ve seen Goodanders, Cormorants, gulls, herons, crows and mink all after smolts. Just need to see an otter next to have a full house. It’s frustrating to say the least when these fish don’t seem able or willing to take the man made route that is available to them but they aren’t to blame as its an entirely unnatural situation. 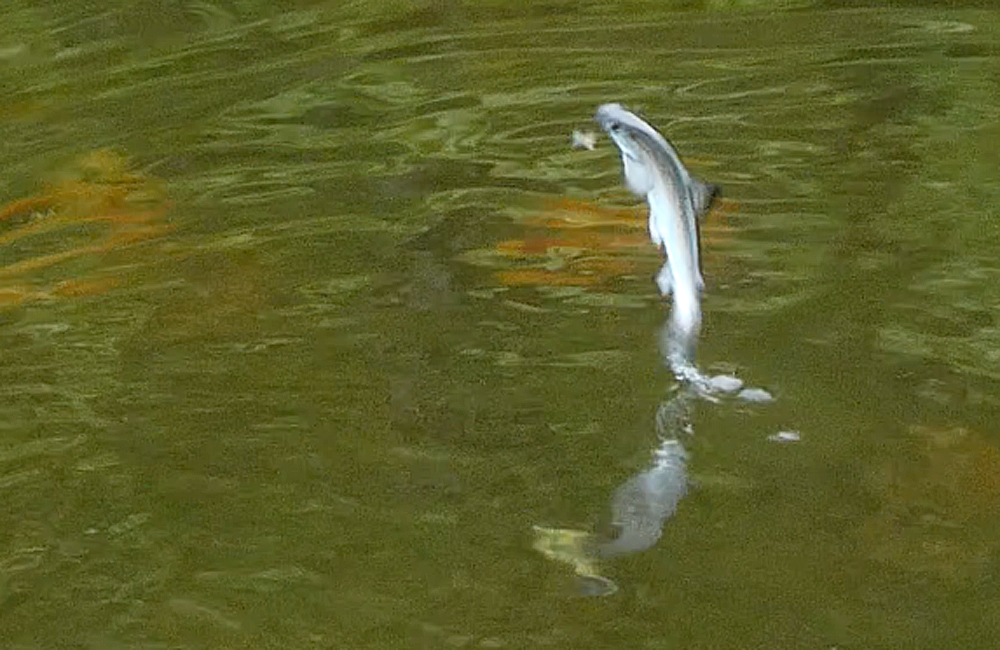 A smolt rising to a Grannom within the lade

We have written to the Board and SEPA on these issues.

More details of smolts at Catrine Smolts in slow motion