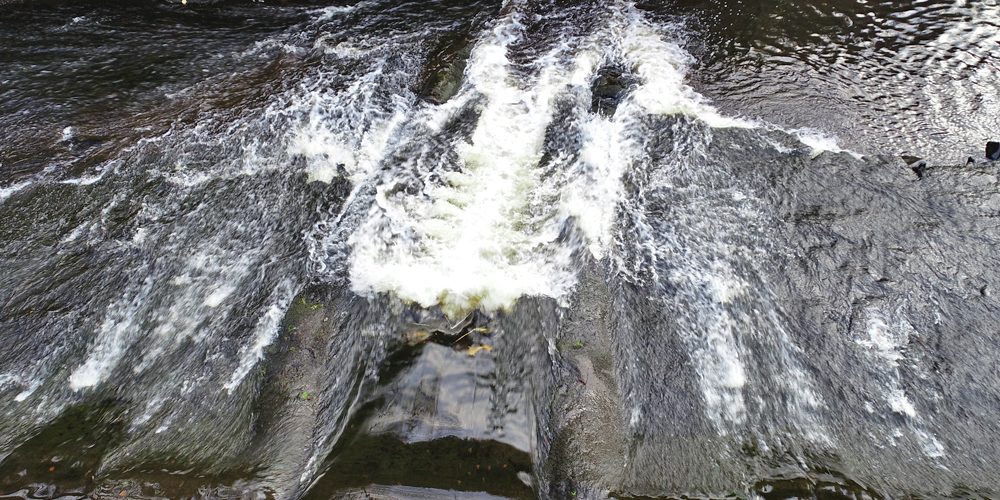 ART recently asked SEPA to confirm that the works to the fish pass at Sorn Castle had been completed. SEPA responded informing the Trust that they allowed the hydro scheme to commence operation and the operator’s were instructed to do the works over the summer. ART and the DSFB were of the understanding that the fish pass was to be completed prior to the hydro scheme being commissioned. SEPA were unable to confirm whether the work has been done or not.

ART decided to use their drone to insect the fish pass this week. They inform us that neither the side walls have been increased nor the baffles extended; the two elements that required improvement. Too much water escapes this fish pass and there are too few baffles installed. The speed of flow through the fish pass remains excessive and the length is too great for salmon to maintain burst speed over the required distance at those velocities. As water spills from the fish pass over the side walls, too little depth remains over the Larinier baffles.  The DSFB supplied extra baffles that they had recovered when the company that was installing the original fish pass went into receivership during the construction and the pass has since remained unfinished. In the last 12 years or so, there has been no improvement to the fish pass despite ART seeking assurances from SEPA and the Estate’s factor that this would  be completed. 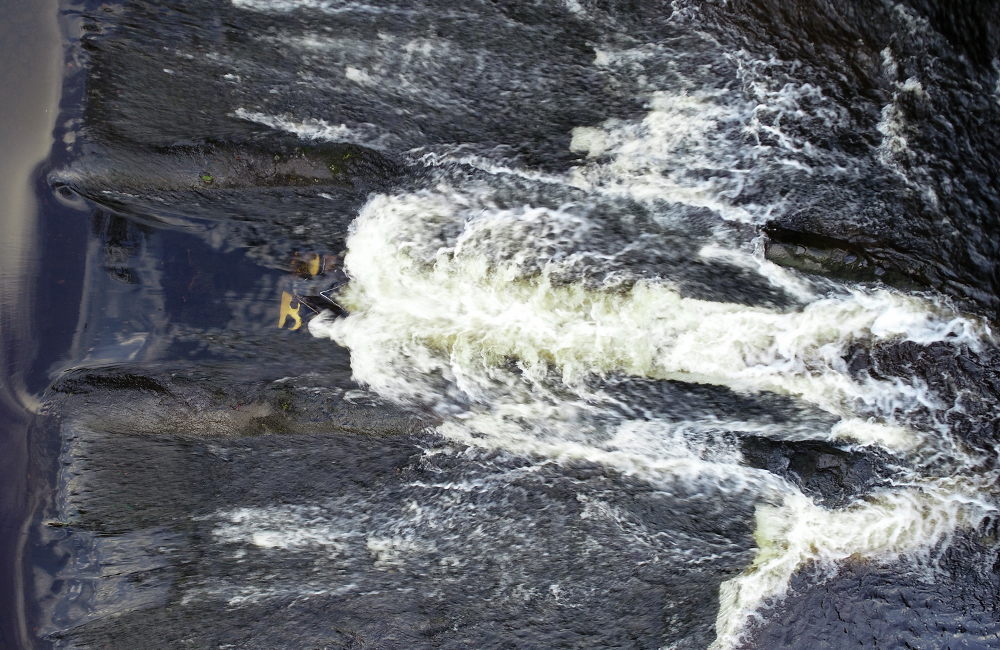 From this image, it is obvious that the missing baffles have not been added nor the height of the side walls raised. 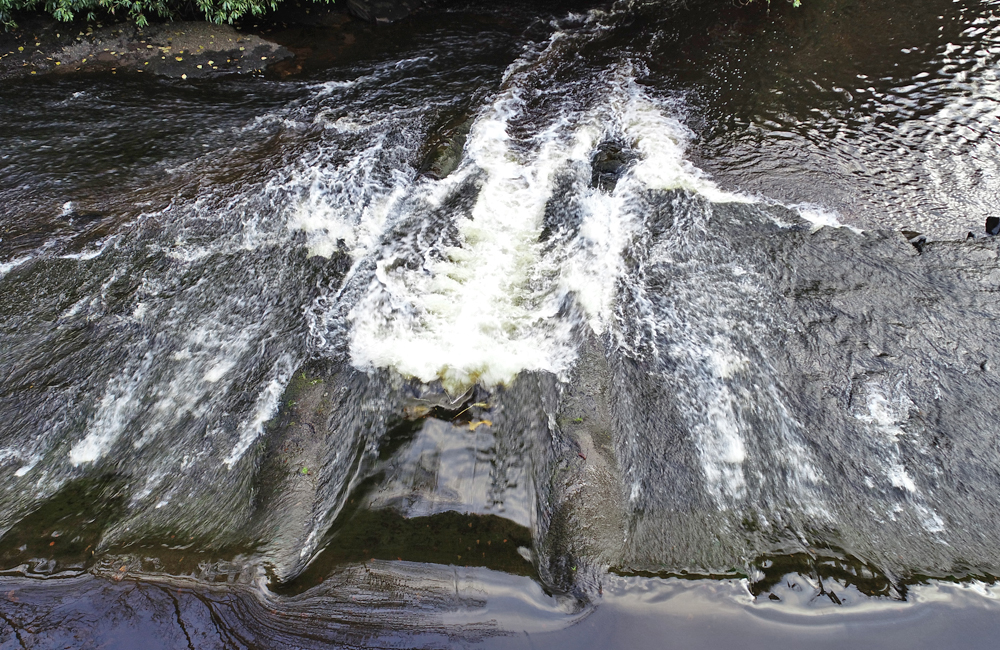 In this image, the upper baffle section can be seen and the slower flowing white water commences as it passes over the first baffle. It requires the baffles to reach the crest of the weir to ensure fish make it through and therefore this may take an additional couple of baffles to solve this issue. There may also be a requirement for additional baffles at the bottom of the pass. Too much flow escapes over the side wall and thus they require to be raised in height.

ART also checked the screens at the hydro and these and the smolt by-wash that has been installed appear to be an ideal arrangement.  In fact, the smolt arrangement at Sorn is very similar to that suggested by ART for the Catrine Scheme nearby. Hopefully the Catrine scheme will be improved prior to the smolt run in 2020. 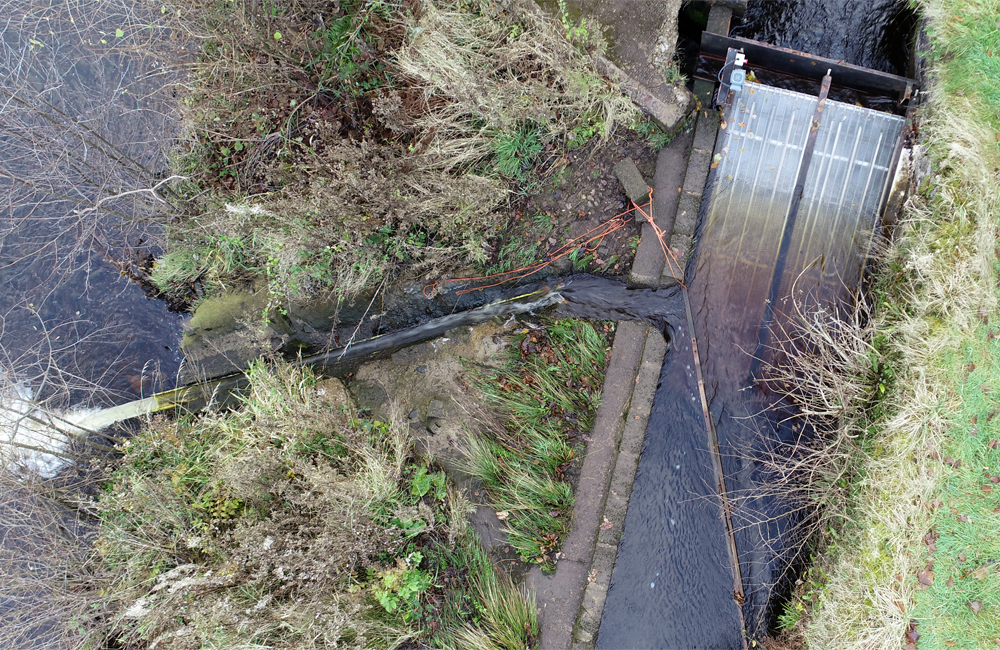 The arrangement for smolts at Sorn Dam lade appear to be ideal and should allow smolts to escape should they be drawn into the lade. The self cleaning screens reduce the manpower required to maintain electricity production.

Let’s hope that SEPA and the hydro operators can resolve the outstanding issues at the Sorn fish pass prior to the salmon run next year. ART will be seeking confirmation from SEPA that the improvements will in fact take place early next year.