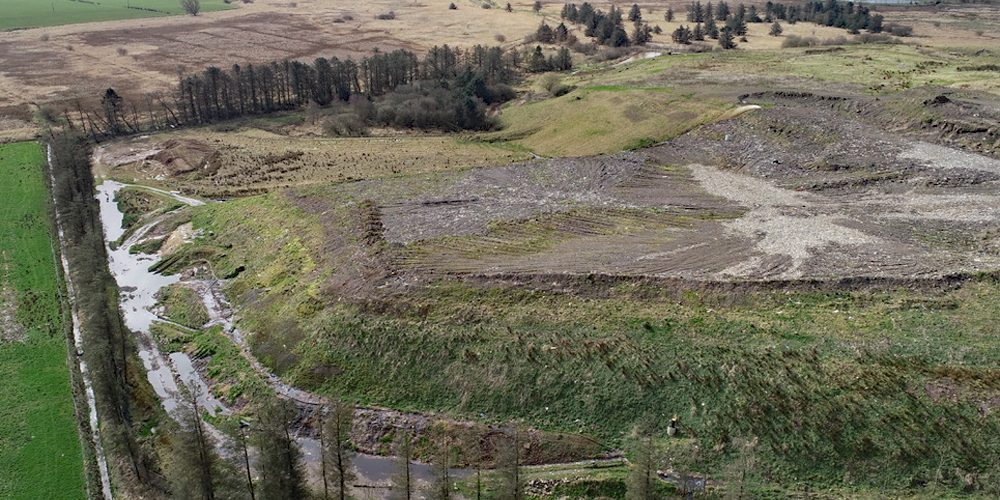 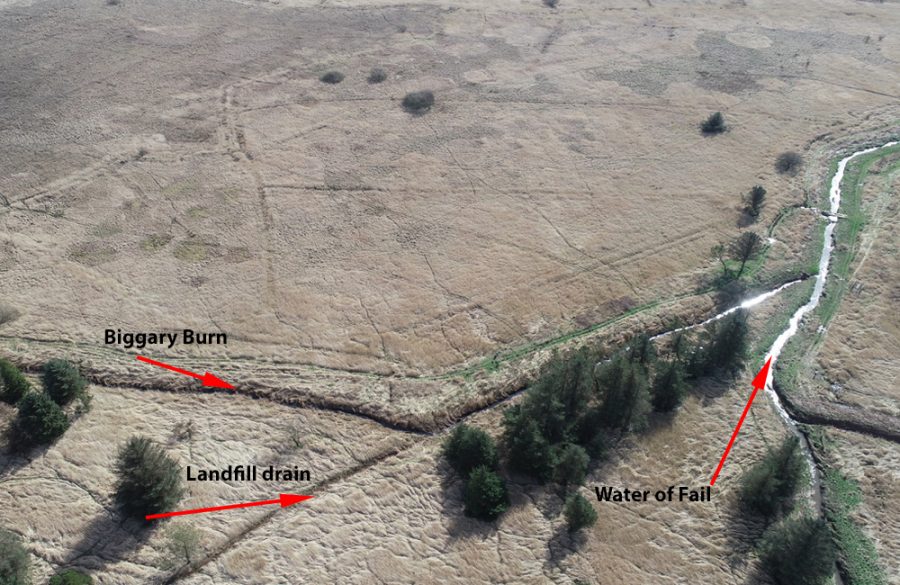 The close proximity of the landfill to nearby watercourses poses a real threat to fish and ecology. It should never have been built in a wetland but that’s a decision taken many years ago.

For nearly a year, Tarbolton Landfill has been closed after the parent company went into liquidation. All operations on site ceased and the pumps were removed. The Water of Fail flows beside the coup which was constructed on a wetland. The threat of pollution affecting watercourses surrounding the landfill was until recently determined to be low but this is now described as ‘high risk’ by SEPA, the regulator. The winter rainfall inevitably leads to surface run off and ground water levels rising and after the wettest month for some time, currently run off is obvious from around the site.

With March rainfall almost reaching 180mm (so far) this has been the wettest month since January 2017  so it is little wonder that the leachate from this toxic dump is now spewing into the tributaries that in turn reach the Fail and then the River Ayr. An environmental disaster is unravelling before our eyes and neither SEPA nor Scottish Government are able to resolve it, so it seems. 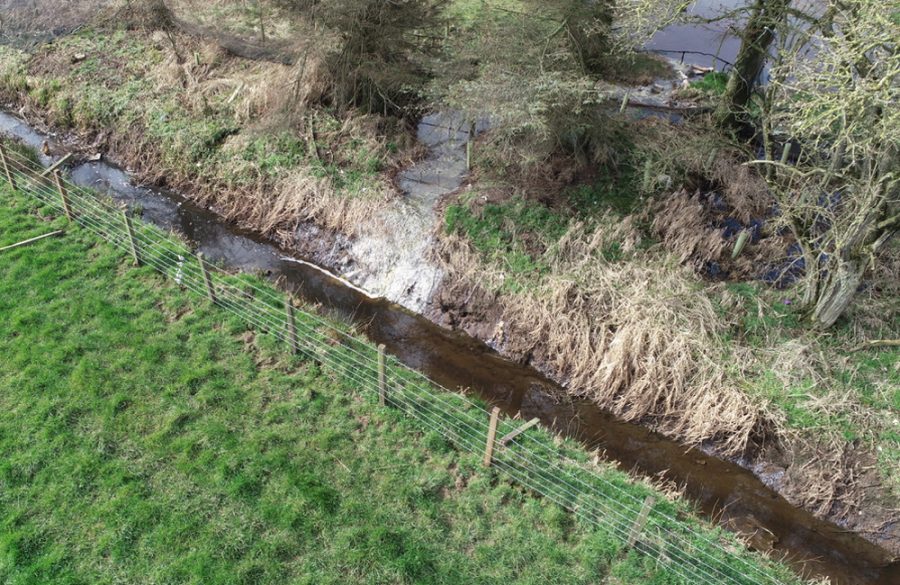 Leachate spewing from the landfill into a burn. Water quality changes within a 10m section of this burn and its easy to see why.

Now SEPA are not to blame for the current situation despite what some would have you believe. They are a regulator not a contractor and therefore it is not their responsibility to operate or maintain any landfills. However they are responsible for ensuring that the operation doesn’t lead to pollution. At the moment, SEPA are caught between a rock and a hard place with everyone looking to them to resolve the mess left after the company went into liquidation. They may still be able to instruct work to take place to address the pollution issues  but at this point in time, this remains unclear. It has happened previously but rarely. What would help if the Government stepped in to underwrite essential pollution prevention measures until the legal wrangling can be sorted out.

What makes matters worse is that this company operated from England and therefore under English Law, they can effectively walk away free from their responsibilities. Resolving this situation satisfactorily through the courts may take years.

In the meantime we watch as the rivers are polluted with chemicals dissolved in run off emminating from the site. Struan and I visited this morning and filmed the situation. It has worsened since our last visit and I expect that will continue in the near future. We really do need intervention now rather than in 6 moths or a year’s time by which the damage may be extensive. 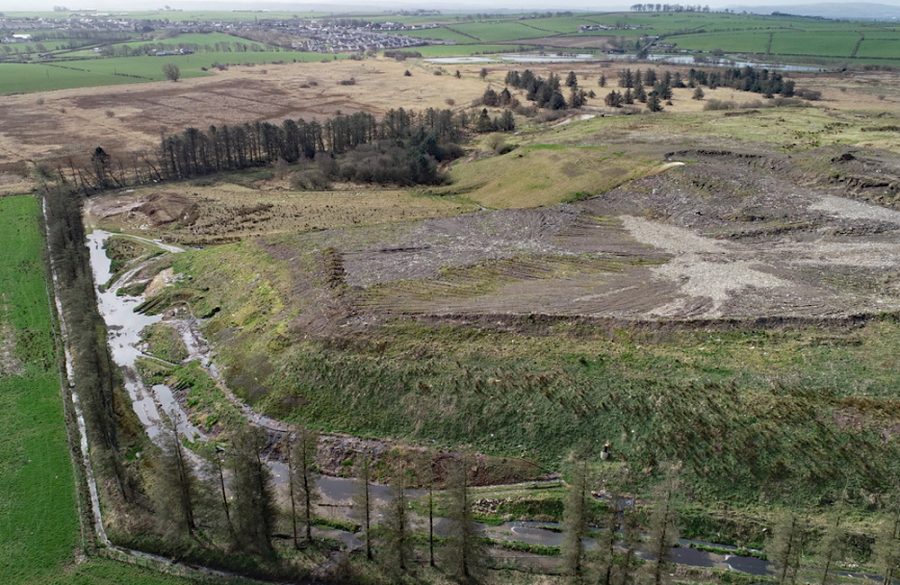 We also noted that Gian Hogweed surrounds one of the lagoons that eventually spills down into the Biggary Burn and the Fail. If this isn’t addressed this year, it will lead to widespread reinfestation on miles of river that has been under control for over 10 years. We will attempt to address this problem and will continue to drive for resolution of the larger problems as best we can. 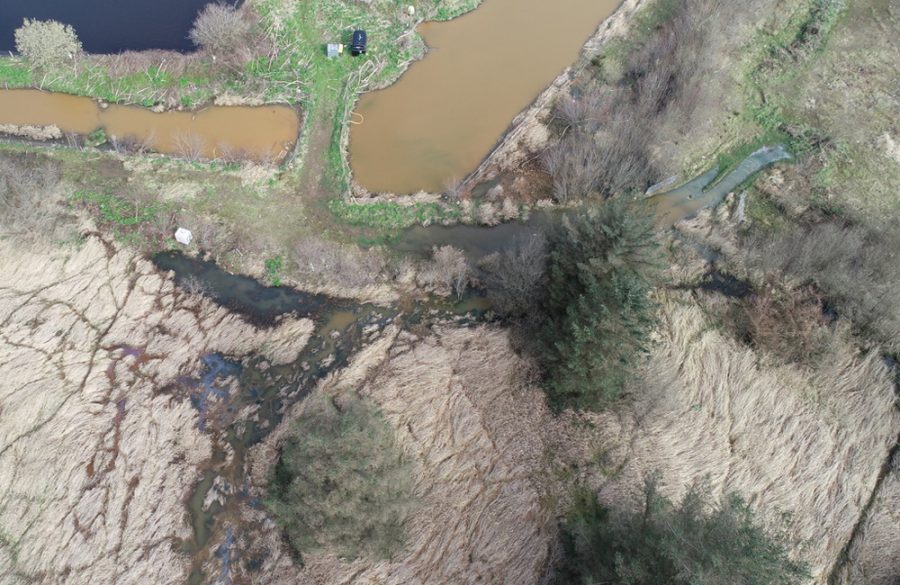 Giant hogweed has been allowed to explode out of control on this site and we saw evidence to this effect today. Fortunately we discovered this and we will attempt to find funding to tackle it before it ruins 10+ years of hard work buy the Trust

Ayr Board AGM and Triennium Elections Smolt run at Catrine