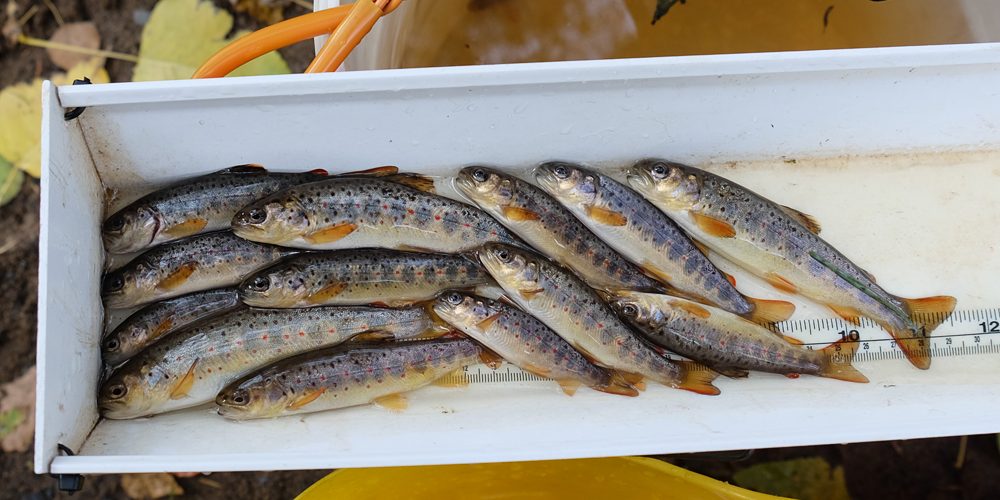 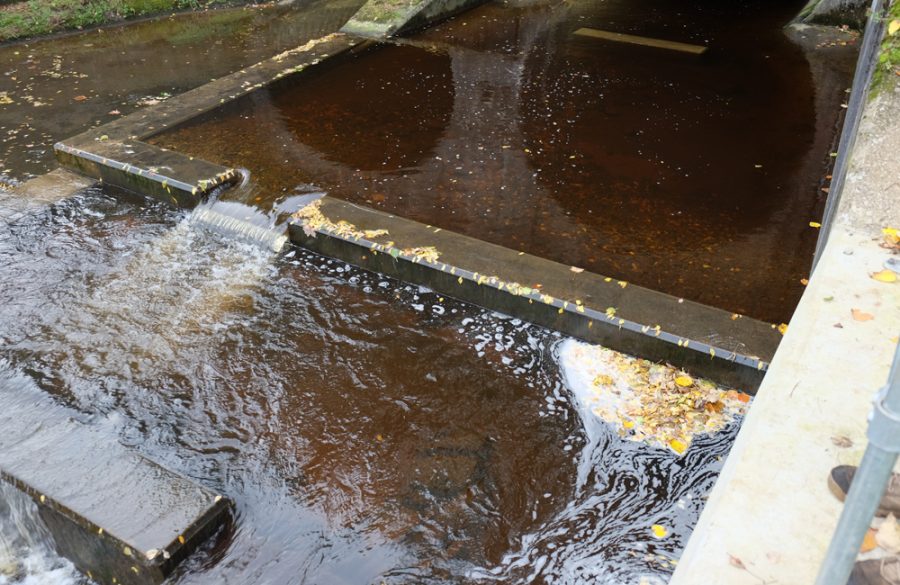 The new fish pass at the A76 culverts on the Glaisnock Water. While not perfect, they are an improvement and should allow trout and possibly salmon migration.

The Glaisnock Burn at Cumnock has had a fish pass added this year and while it may take further improvement to see salmon making it up that far and through the culverts, trout should be able to pass what has long been a barrier to upstream migration. The Trust requested fish passage be restored at the culverts and worked with Transerve Scotland to bring this about. While the new fish pass may not be perfect, it is an improvement over what existed for 30 or so years. Further alterations may be required but monitoring of what happens over winter will be required to justify this.

In order that the Trust can make an assessment of the efficiency of the fish pass, they gathered base line data this week before any spawning takes place this winter.  They expected to find a healthy population of trout in what looks potentially good habitat. Sadly numbers were poor and very disappointing and perhaps there’s other problems that also need addressed.

Biologists from ART tried to pinpoint exactly where the problems are arising. They first looked downstream of the Meadow Burn at a site on the Glaisnock which looked promising. Despite good habitat, the bed was solid and immobile and only 3 trout parr were caught in what was describe as otherwise ideal habitat. Alarm bells were ringing. Concreted substrates often occur where silt loading is high. This reduces spawning success and egg survival. 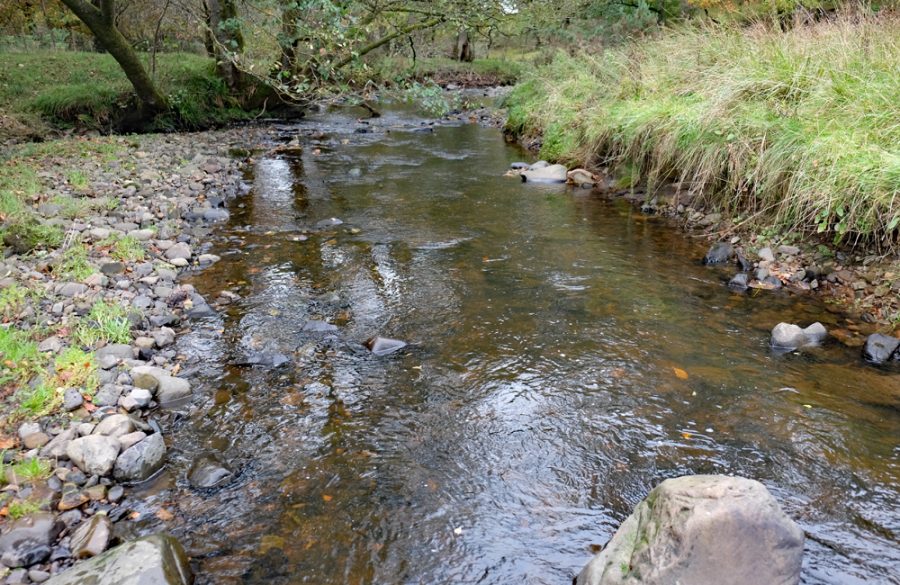 Largely unpopulated habitat on the Glaisnock. Why? This entire stretch was surveyed and only produced the 3 trout in the picture below 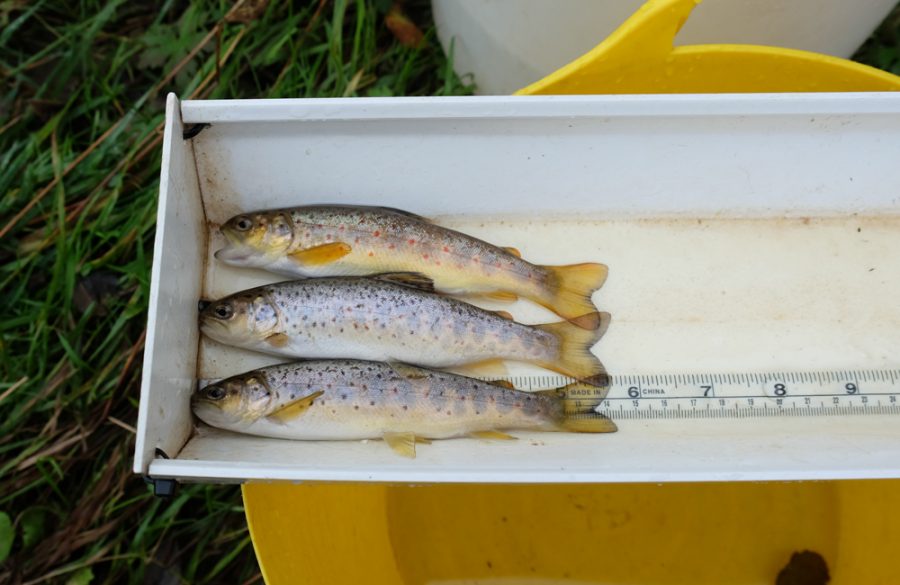 3 wee trout from the above site. That just isn’t good enough from this habitat

ART surveyed another site a short distance upstream above the Meadow Burn and found little. Thy then headed to a historic site at Glaisnock House where a small burn enters (from Benson). Having historic data at this site allowed them to compare results with old data. This survey compared reasonably favourably with previous results yet only a 150m downstream there were virtually no trout.   With no other inputs entering the burn other than this tributary coming from Benson, which was polluted a couple of years ago,  ART speculate that the pollution incident may have killed fish downstream of the confluence. Those trout at the confluence this week may have been produced in the Glaisnock upstream of the tributary and drifted downstream since the incident into vacant habitat, repopulating the burn naturally. This is a feasible explanation of why the Glaisnock downstream had so few trout or even minnows when surveyed this week. 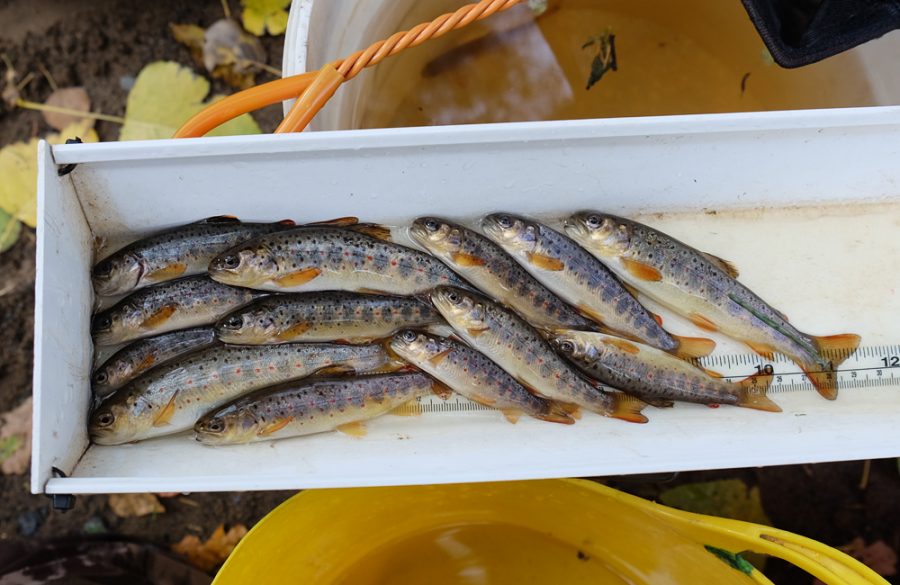 The source of the pollution was never identified. It was reported to SEPA by ART at the time but those responsible weren’t traced. The burn turned a milky white colour, possibly from milk or silage inputs but that is only speculation. Both milk and silage effluent remove oxygen from water and may kill fish.

ART then went on to survey a site on the Meadow Burn and were disappointed by the result of a single trout parr. Considering the cover in this site, there should have been several and all year classes present. With this entire catchment under producing, once again, we will resort to asking SEPA to help investigate the problems as water quality issues may lie behind the lack of fish. 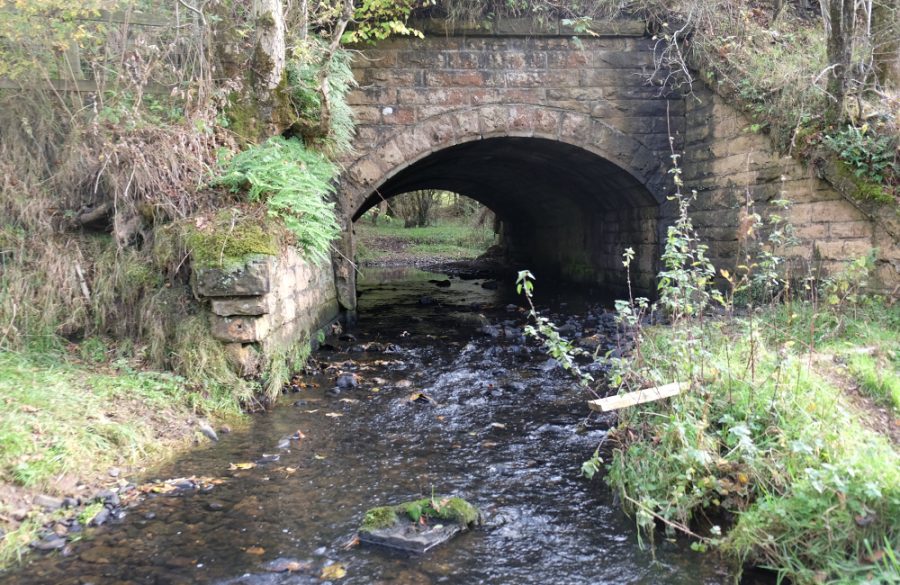 The road bridge over the Meadow Burn. ART found little evidence of fish in this burn despite obvious potential. Habitat like this should be full of trout and salmon. We need burns like this to be producing to their full potential

These burns should be full of trout and if water quality and access are resolved, salmon too. Sea trout and salmon numbers can normally be increased easily by opening up new habitat but it does require good water quality too.