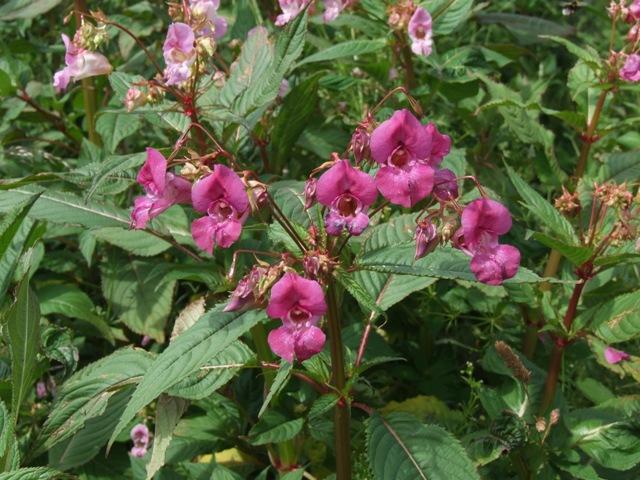 Until the last few years, the River Ayr catchment was the only system in Ayrshire free from Himalayan balsam. In 2013 Ayrshire Rivers Trust found 5 plants and pulled them in Ayr opposite the college. In 2014 ART found a single plant at Barskimming Bridge and it was pulled. Again last year ART found this invasive plant on the Lugar in increasing quantity and pulled it the vicinity of Dumfries House and downstream to Auchinleck House estate water.

It is clear that there is a low density population that will quickly rampage out of control unless it is effectively dealt with and the board have to rely on both anglers and landowners to take the time to pull any plants they see. In fact we need everyone to actively seek this plant out before it takes over. 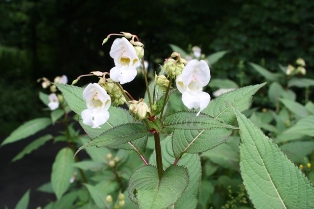 The flowers range from deep pink through to almost white.

Himalayan Balsam is an annual plant that reproduces from seed. As the seed pods ripen, they explode spreading the seeds for up to 7 meters. A single plant can produce as many as 2000 seeds each year and they remain viable for around 2 years so although invasive, this plant can be eradicated by effective control sustained for a couple of years. Himalayan balsam is a problem because it excludes other native species. In winter the plant dies back leaving river banks bare and prone to erosion. Soil enters the water increasing siltation and bound to soil particles are nutrients that lead to enrichment and reduced water quality eutrophication and oxygen levels. This plant is a huge threat to fish population for the above reasons.

Pulling and uprooting plants is the method that anglers and landowners can easily use on the Lugar and Ayr to achieve eradication before the plant takes hold. More details of control methods are listed below.

Due to reduced angling effort and membership of clubs, the Ayr board doesn’t have the ability to raise levies to provide adequate financial resources to allow contractors to be appointed to deal with this plant so in reality, unless anglers and owners quickly get on top of this plant, it will quickly explode out of control and become impossible to eradicate.