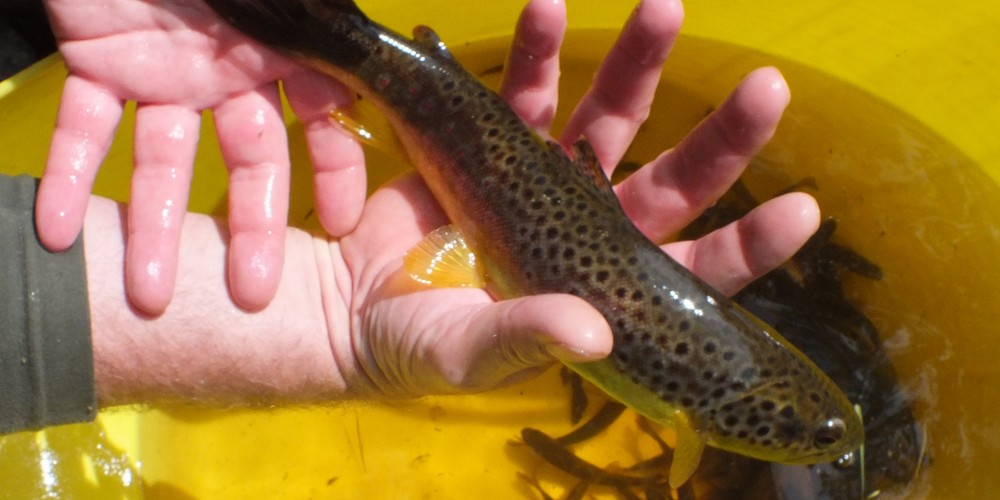 The results from the timed electrofishing surveys on the upper river have been mixed but more encouraging that expected following very poor results on the lower river reported earlier this week.

ART biologists were in action yesterday from Sorn upstream. The site at Glen Logan has always been poor despite the habitat being suitable for spawning and fry production. It isn’t the best habitat but should produce more fish than it does on average. This years results were consistent with further downstream and poor. The parr numbers were good but as this isn’t designed to be a parr survey, slightly irrelevant but at least they were there indicating that somewhere upstream, fry are being produced and dropping downstream to the site (last years results also indicated poor fry results).The survey produced a few trout too and one was nearing a pound in weight. 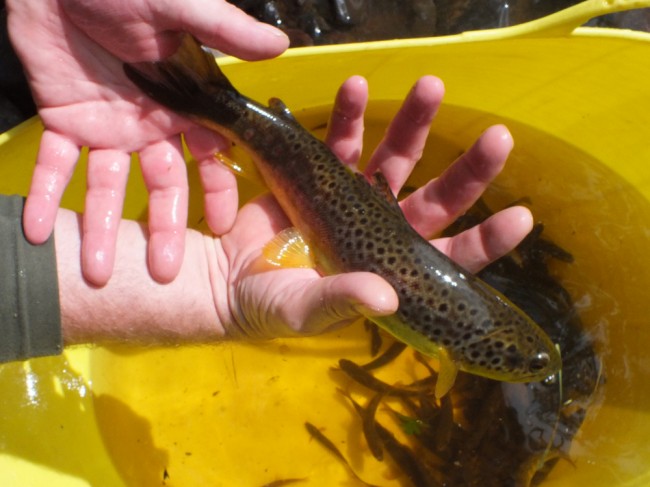 A nice trout captured during an electrofishing survey, shortly before it was released back to the river.

Further upstream at Limmerhaugh, the numbers improved significantly as was expected. This site has consistently produced amongst the best results ART find on the upper river and 2014 results are the best on record at 31 fry per minute. The importance of this area for spawning can’t be stressed enough and perhaps the increase may be attributed in part of the increasing numbers of salmon anglers release. 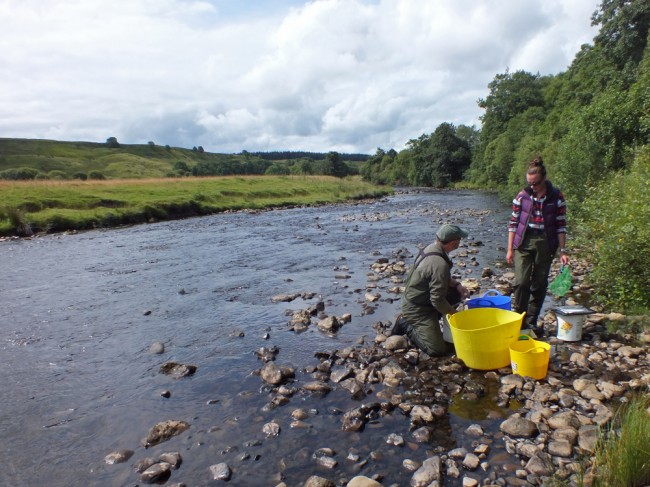 The biologists discussing the catch after electrofishing. All fish are returned alive after the survey.

Further upstream at Nether Wellwood bridge, the results were ok. This has historically been an important spawning site and continues to be, but in recent years, the river bed has become increasingly silted and coated with algae and mosses thriving on enrichment. This may stem from a combination  of agriculture and mine discharges. At the time of the survey, the scientists noticed pollution stemming from the Powharnol Burn and reported this to SEPA. It appears that cattle have access to the burn and this leads to the level of pollution we can see in the photo below. This can only be detrimental to the system and must be stopped. Trust biologists have repeatedly reported pollution from this burn and the riverbed used to be clean and free from silt…not now. 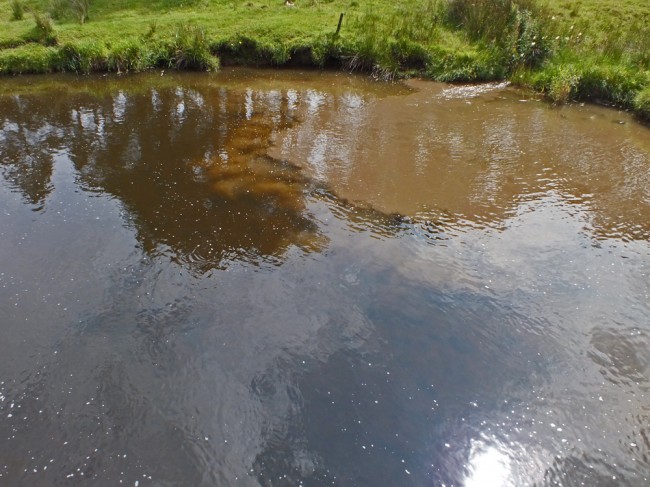 The last survey on the main stem of the river is upstream of Muirkirk and a short distance downstream of the Ponesk confluence. This area has some of the best gravel beds on the river but for several years they have been in poor condition, coated with moss and algae and trapping mobile deposits (sand silt, iron ochre). Previous surveys in this area indicated few salmon were successful in spawning, water quality was poor stemming from the Stottencleugh but the Ponesk appeared to be good. 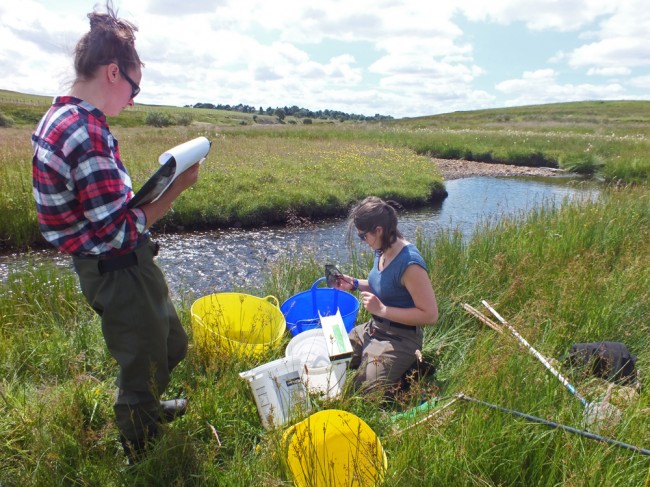 Biologists recording the catch downstream of the Ponesk. The results were excellent and the best on the river this year.

With the work completed on the Ponesk and access restored, ART established a new monitoring site in 2013 near to the Spireslack entrance. Over the coming years this will help the biologists to assess and monitor recovery in this area should it happen. 2013 survey results were very encouraging and better than any sites in the lower river. With mine activity halted 2014 results were keen anticipated to be better and they were… by a mile. ART found that this site produced the best catch per minute of any on the entire River Ayr with an incredible 34 salmon fry per minute coming to the net. (170 salmon and a handful of trout made up the catch). This would be a good result in any river in Scotland. With a variety of habitats available to adult and juvenile fish in the upper reaches,  lets hope that this area continues to improve in the years ahead but worryingly, in the last few weeks biologists have noticed increased enrichment on the lower Ponesk arising from rebounding water levels in the abandoned mine. This mine water leads to iron oxide coating the river bed, reducing oxygen flow through the gravel. Iron deposits are seen to be increasing downstream on the main river.

All photos are supplied by ART who retain copyright.