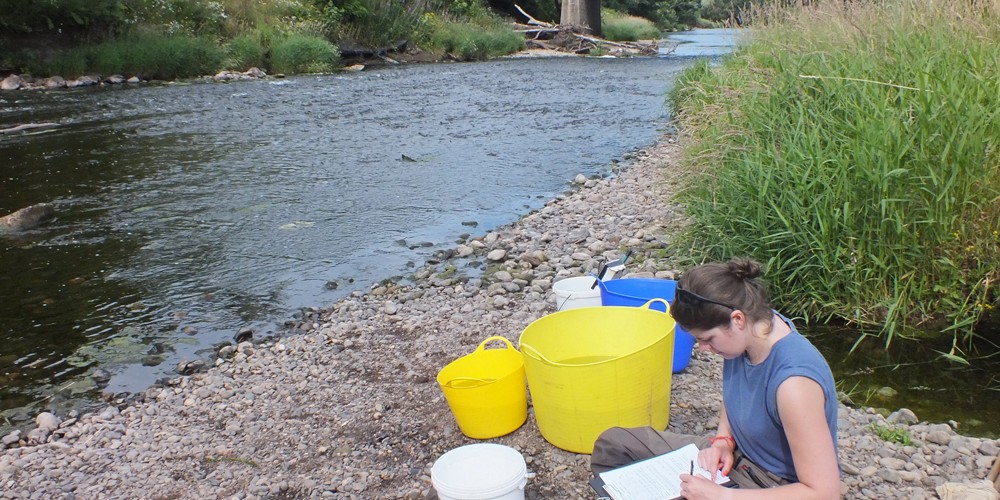 Ayrshire Rivers Trust staff were out on the river today undertaking their annual timed electro fishing surveys. This year, bailiffs assisted and I’m sure they found the day very informative.

ART assistant biologist Helen recording the catch at the Stepping Stones site on the lower river. Numbers across the lower river are extremely poor and causing great concern for the biologists and anglers alike.

The survey is repeated annually at the same locations across the catchment. ART indicated that results so far have been very poor and down on last years numbers. They have yet to complete the survey at the 16 sites so until they have finished, they won’t be able to report in detail but they are concerned that last year’s spawning doesn’t appear to have been as successful as was hoped. This may be due to the huge spates and prolonged high water over winter, but equally it may be as a result of the prolonged drought this spring and summer. Of course it could also be linked to pollution, predation or any number of other things but hopefully once finished, they will be able to provide more information. For several years the Trust’s biologists have been warning of low fish numbers in the river and encouraged anglers to do their bit by releasing salmon to allow them to spawn. In light of the poor numbers that they have recorded over the last few seasons, it makes sense to try to conserve salmon stocks. The Board has recommended that anglers retain no more than 3 salmon per year and all large fish and spring salmon should be released. Similarly all sea trout are to be released.